Our shed has had rather a short life 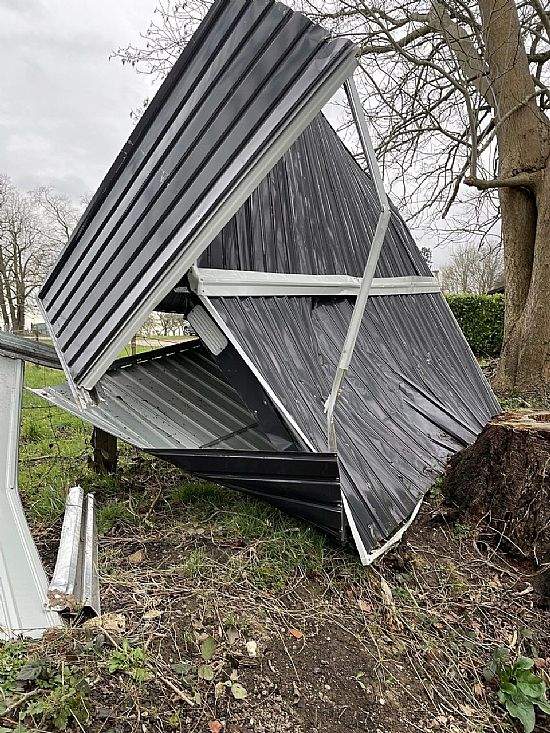 We had a fair turnout of DF95's on Friday for the Cup event which was won in convincing style by Mike Tidy who managed to master the tricky conditions in style. The weather was kind for the 8 race sail off where a special thanks must be given to Peter Martin for once again recording the results with deadly accuracy! This is Mikes second trophy of the season making him our most successful member in these competitions.

Here is Mike receiving the trophy from yours truly on the left: 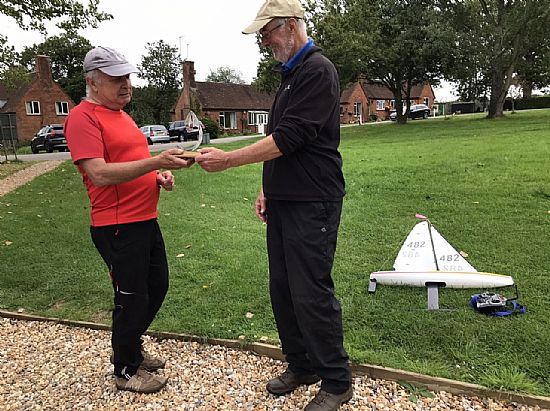 The long awaited return to Petworth finally took place last Friday following last years cancellations due to Covid. A good turnout was helped by 4 Frensham honorary day members! The weather was very nice with some good breeze playing havoc with our starting line by blowing one of the buoys out of position.

We did about 6 friendly races for 65's with Chris joining in with his largest craft, pictured below. The Frensham contingent turned up with a racey looking tri and two classic 15 metre class model yachts which spent most of the time ashore unfortunately. A lot of interest was shown by passers by who were out walking the dogs or just enjoying the setting.

We had a friendly reception from the National Trust who will invite us back next year. The charity event that we attended last time also returns next year. 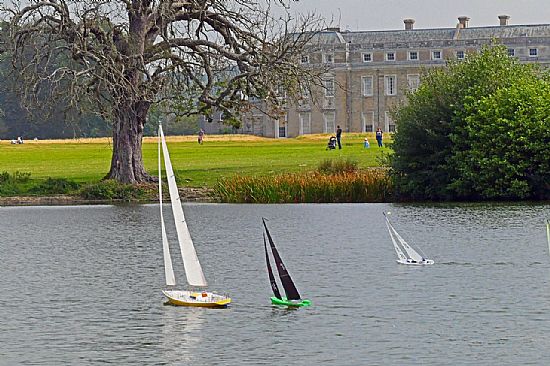 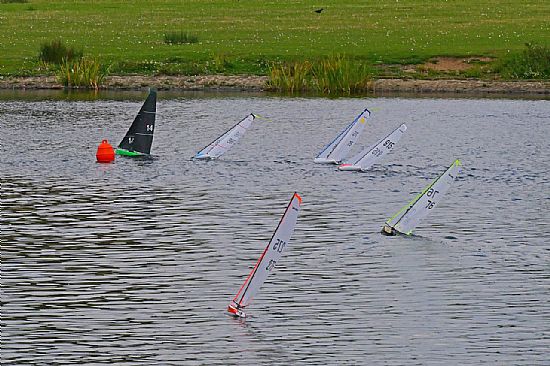 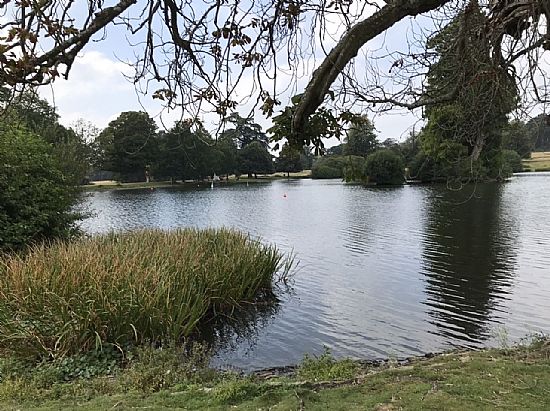 Our annual regatta in memory of our former leader was held today in blustery and sometimes damp conditions brightened by occasional sunshine. A total of 8 races were completed with up to 9 DF65 yachts on the water. Sailing conditions were very difficult with occasional strong gusts of wind followed by calm. Overall winner was Mike Tidy seen photographed here on the right. 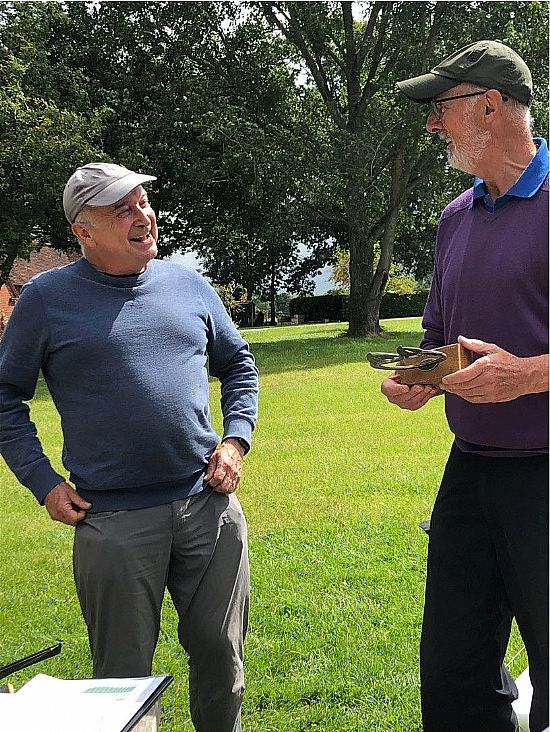 The racing was very close for much of the time with no one individual dominating the results. 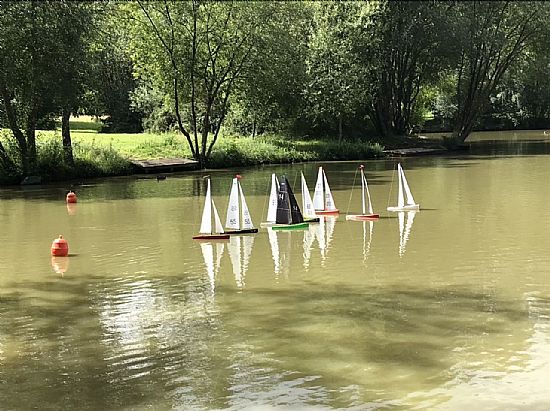 Some old photos have recently come to light taken at Springbok during the early days of our club. I think the staging in evidence has been replaced twice! The background is interesting in so far as how small the trees are and how little vegetation there was. Does anyone recognise any of the people present? 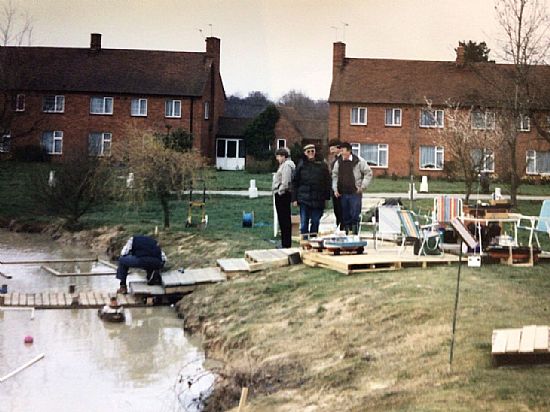 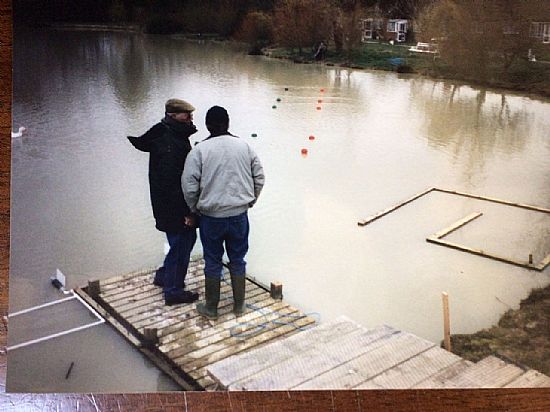 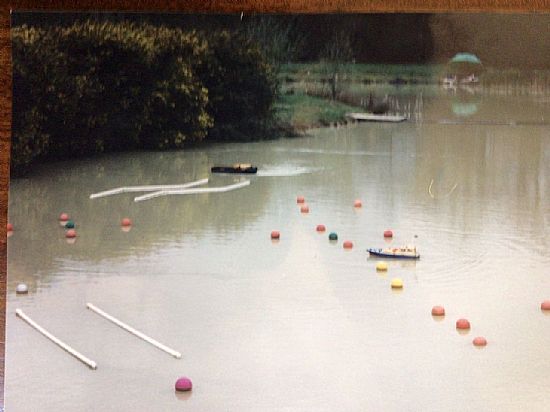 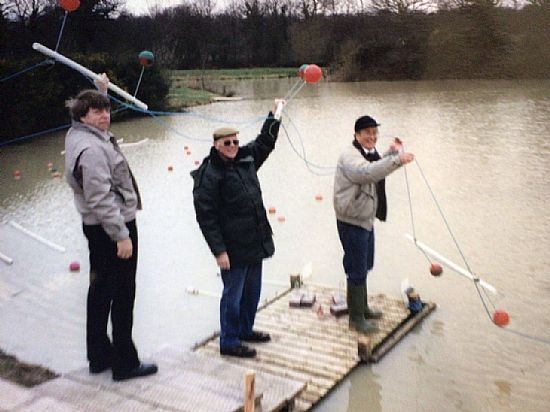 Club is affiliated to the Model Yachting Association (MYA) 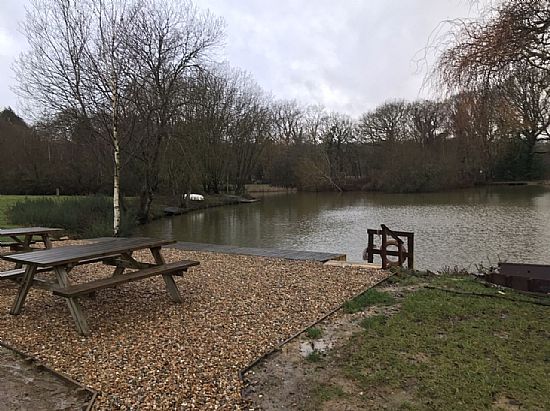 YouTube video of an Alfold Show in the distant past when social contacts unimaginable today were still allowed! 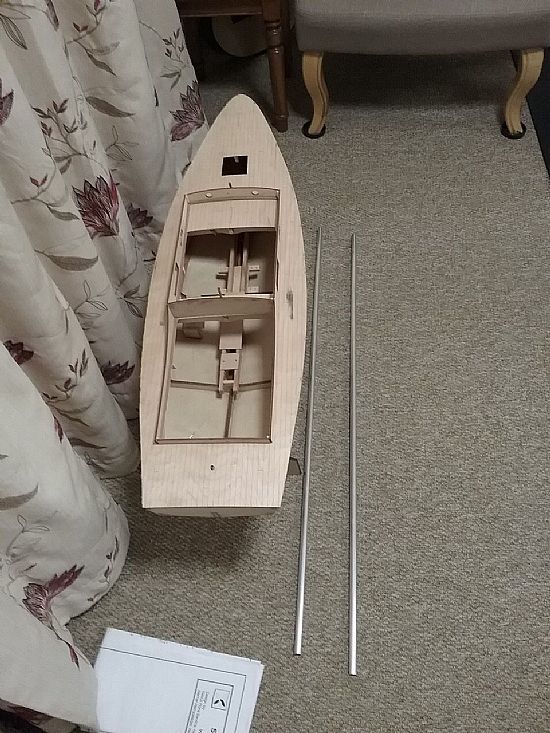 Mike has been busy working on his new Starlet again, the yacht that seems to be taking the club by storm. This one is a little special I think as he is clearly installing some indoor plumbing for the installation of a WC or perhaps a working galley. Mike pretends it is for routing some control lines which seems most unlikely. 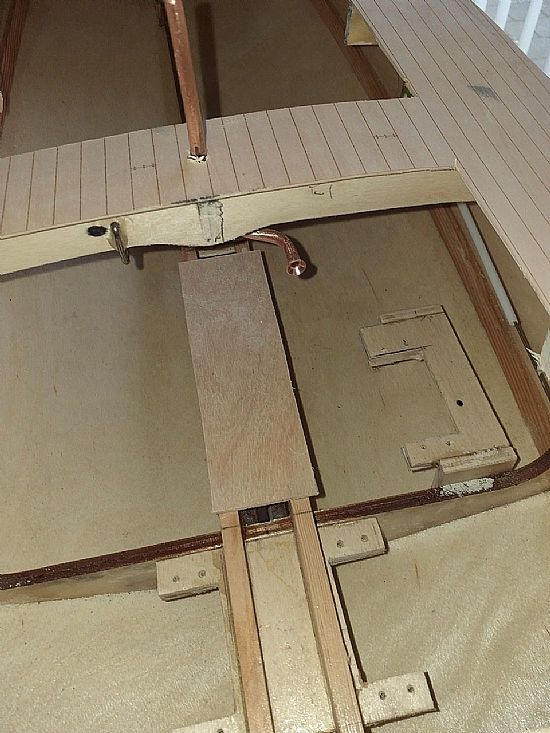 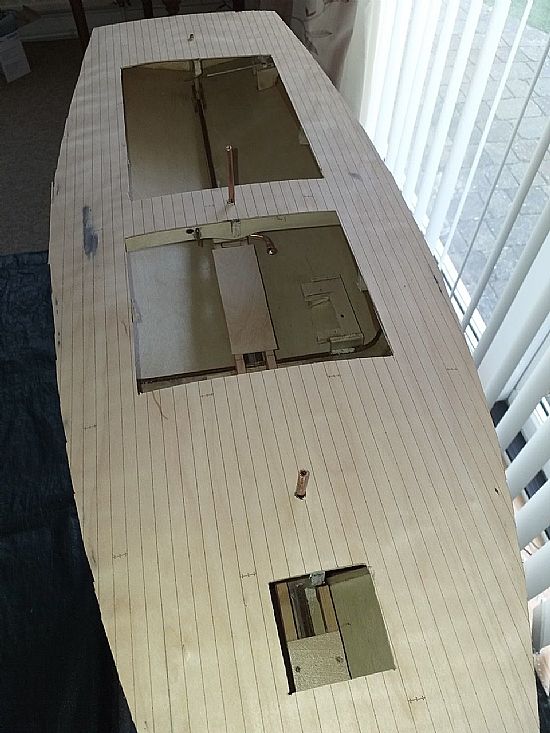 Pete Shires has been busy working on his Starlet and sends us the following report:

I have just cast the 2 keel weights for my Starlet. Having cast weights in the past and had no problems I know that others may find it difficult. If someone wants help in casting I am offering to cast their Starlet keels. This offer is for Springbok members only. I am going into mass production!

I use a large gas bottle which I get refilled which is so much easier.

ps: They will also have to supply some lead (about 5lbs).

Anyone wishing to avail themselves of Pete’s generous offer kindly let me know please.

Happy New Year. Boating suspended once again due to Covid 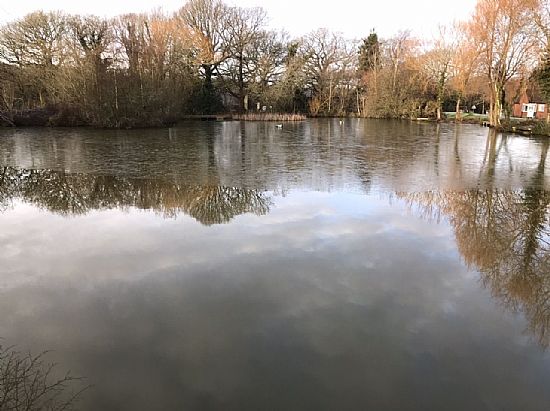 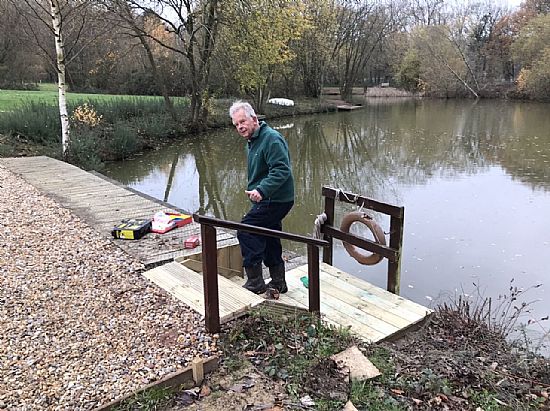 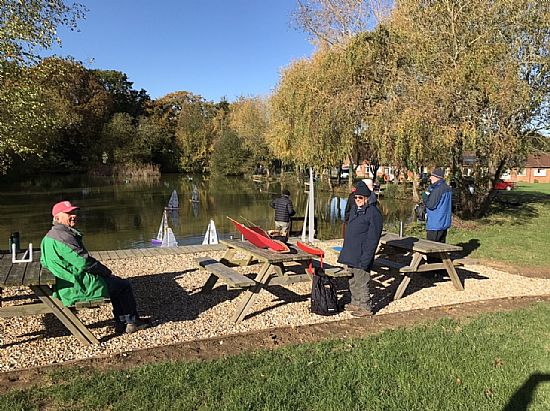 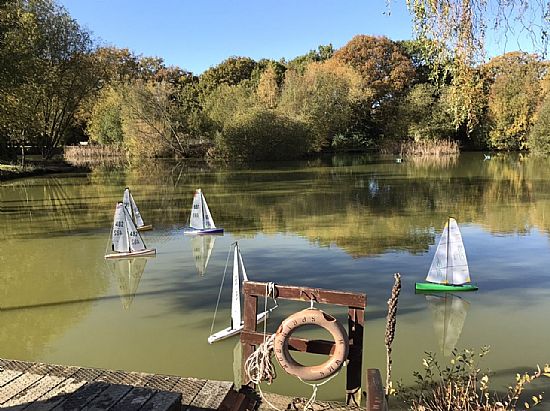 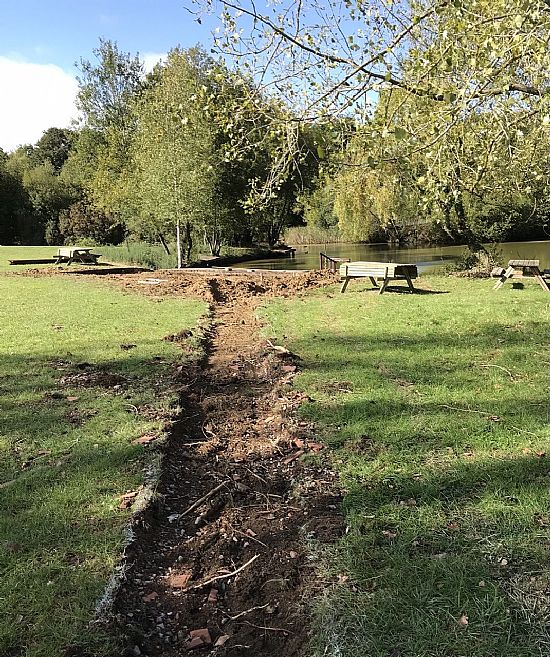 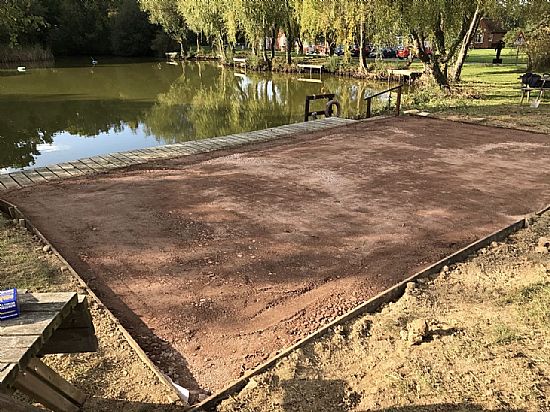 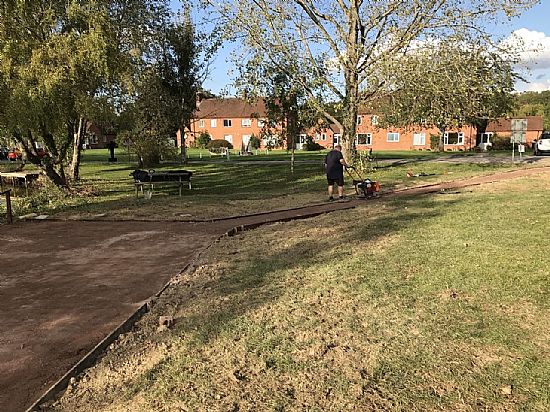 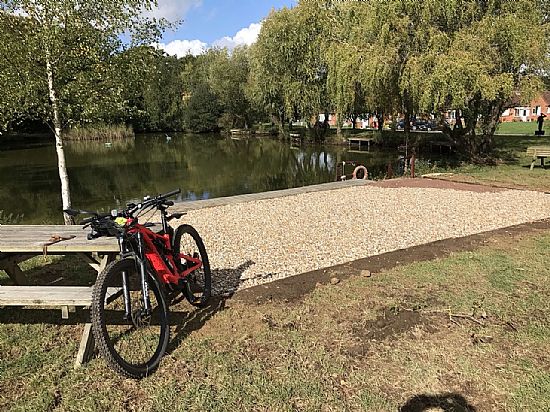 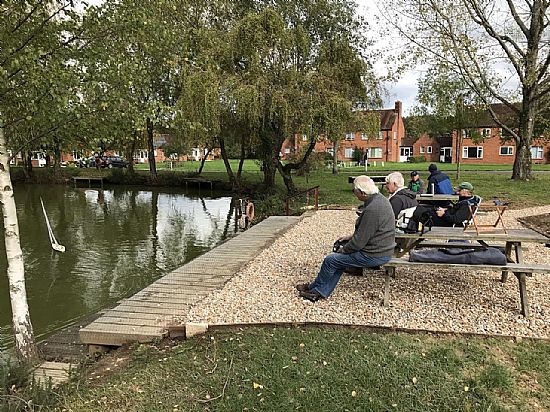 Following the unceremonious eviction from our shed, and the unsatisfactory alternative arrangements offered, we have gone ahead and purchased and today erected our our new shed. Here is a picture of work in progress: 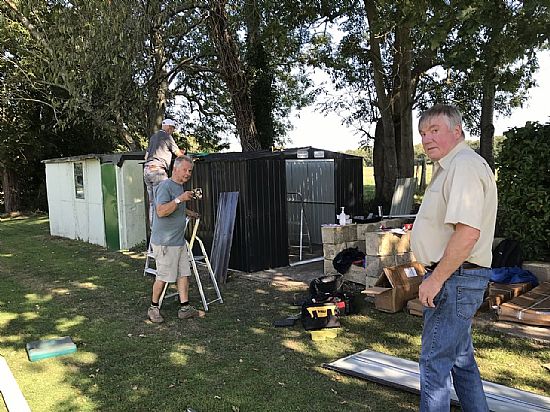 Most of the work is complete and will be concluded on Wednesday. Special thanks go to Mike Tidy, Richard Crew and Peter Shires whose efforts over a long day were outstanding. Our immediate local resident (pictured in the foreground) also helped out throughout the day with his wife providing refreshments in the high temperatures recorded. 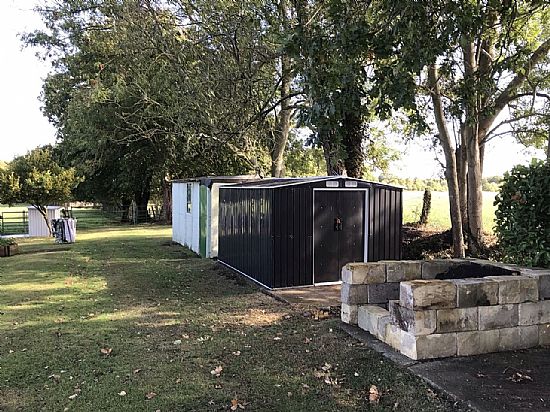 The Geoff Millichamp memorial regatta 2020
The Geoff Millichamp Memorial Regatta was sailed in DF65 model racing yachts last Friday in brilliant hot sunshine in a decent if erratic breeze. Turnout was down on last year but two heats were sailed in the morning, each with 4 yachts, followed by the finals after lunch.
Thanks must be given to Peter Martin for his unflinchingly honest stewardship resulting in me being awarded first prize! This was after 3 races with one discard. The result for second place was so tight it had to be shared between Steve Hill and Richard Crew. Following on from this was Mike Tidy and then Richard Norman.
Last years winner Richard Crew awarded the trophy in the absence of the invited dignitaries who had better things to do with their time.
A most enjoyable, if slightly exhausting day in the heat was had by all the participants prepared to offer an opinion. Here is the winner accepting the trophy in the time honoured tradition. 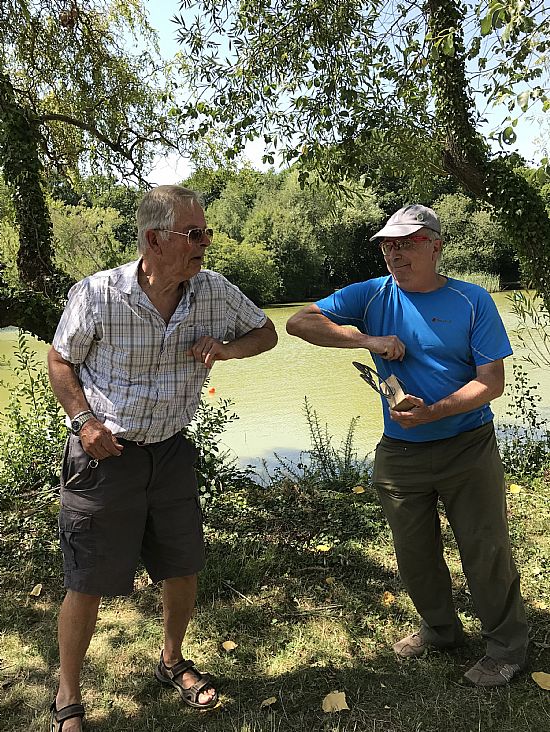